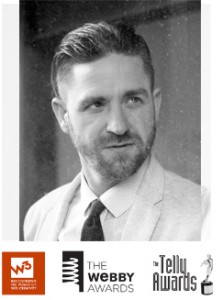 My freelance company, FlashVenom, dates back to 1996 when I became involved with a multimedia group called OCMMUG. There, I was fortunate enough to meet an amazing mentor, Gary Birch, when I was only 14. Before e-mail, Toy Story, and Adobe Flash, his small company, stat media, began creating 3d effects and multimedia websites for Fortune 500 companies using a  program called Macromedia Director (Shockwave). Together, we created the first internet-enabled CD-ROM, one of the first “business-card CDs” and a ground breaking world-first interactive music video. As a young adult, I was featured on the NBC program News for Kids and appeared on the front page of the Orange County Register for an “interactive resume CD-ROM” I had developed. In my time with stat media, I helped create websites and training CDs for Transamerica, Cerritos Public Library, Toshiba, and Mercury-Oldmobile, just to name a few.

Shortly after, I would establish Flash Venom, a bleeding-edge marketing and art firm with reach into a pool of Southern California’s most talented artists and programmers. During this time, I helped teach classes at the Laguna College of Art and Design, UCI and UCI Extension, and Cal-poly Pomona. For over 15 years I have been acting as the Art Director of a top 4% website, myhero.com, which receives over 2.5 million hits a month.

A love for art translates to every facet of life, and I love to “do it all.” Charity work has me helping produce two film festivals each year and helping a children’s home in Uganda. I love to DJ and produce music, and you can usually find me developing a new game idea, or creating art in my garage. My parents started an insurance agency which is another feather in my cap. Thanks to my beautiful wife and two children keeping me on my toes, my work has been recognized with several awards; a W3Award for design, and two Webby Awards to name a few.

A seasoned professional with the Adobe suite of products, I’ve produced all kinds of digital media. I have two studio albums under my belt using Apple Logic Pro. I also know my way around 3D modeling and animation software like Blender.

Over the years, I’ve become a highly-sought after consultant for my well-rounded knowledge, professional work ethic, and creative solution-based thinking. Along with acting as webmaster for MyHero.com – a site which receives millions of hits a month – I have developed countless data-driven websites for clients of all shapes and sizes. I help run my family’s commercial insurance company, which has me acting as the lead producer and network administrator. I’ve written my own lead generation and customer tracking platform which is to be released publicly as an open source application in 2016. The past five years I have focused on the next-gen-trends of computer programming, with a focus on .NET MVC, C# platforms. My true love continues to be the development of one-of-a-kind user interfaces and ground breaking back-end admin tools for my clients.