The future of web video

The browser wars rage on. Microsoft, Apple, and Google are all companies we’ve come to love and hate in thier own way. But if these companies were a real-life family, they certainly be would be a disfunctional nightmare that only got together at Thanksgiving and when they did, it ended up in a 911 call.

Take for example, the task of embedding a web video. If you wish to publish a video on your own website, setting aside bandwidth concerns, you’ll still have to deal with this. Simply, there is no video standard, existing or emerging for our screens. In fact, these are companies purposely polar-ending each other in an attempt to exterminate any technology they don’t own stock in. Apple has long kicked Quicktime to the curb in favor of HTML5 video such as H264 – banking that it’s dominance in the mobile landscape will make all other formats obsolete. But HTML5 isn’t always available nor dependable, each browser has a different controller/UI, and the ever-important fullscreen mode isn’t reliable across all browsers and OSes.

Google announced in 2011 it would discontinue to support the H264 codec in Chrome. Chome! The browser that “just works” has the trigger cocked on removing a good feature for no good reason. On thier blog they state that it could be pulled any day, leaving web developers no choice but to either place a gamble, or embed yet another format. It’s been almost two years since that announcement and they still haven’t announced anything denouncing that announcement. 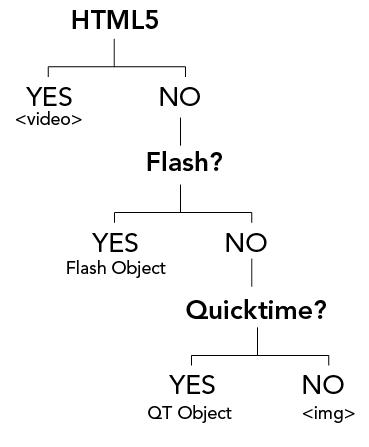 So us web developers are left with a most undesirable scenario. Building a website based browser feature detection. That usually takes us on to a neat little plug-in called Modernizr. I pulled a little part out that will detect HTML5 video. But then you’ll also have to detect Flash with swfObject. And then for all the videos I already had with Quicktime, I’ll need to do a check for that. I have to wonder, if H264 is a hardware codec, why can’t Flash just do what it takes (legally speaking, more than technically) to embed it?

Obviously Flash is not done yet. In fact, Flash is still the king of desktop web video – still being utilized in default by video giants such as YouTube and Vimeo. Still. Coming up on 3 years after Apple’s hilarious Flash-bash letter. Why? Because it just works. The same. On all browsers. Consistantly.

I’ve been quite pleased with HTML5 video on mobile. And for me, a Flash video with an HTML5 fallback will cover most of my users. According to my stats of all my clients (about 3 million hits a month) If the user doesn’t have Flash… there’s a 90% chance they are on an iDevice. So go ahead and give them the H264 <video> tag. This leaves one small group – desktop users without Flash and with an old browser.

Out of all the companies fighting for web supremecy, Adobe has taken a pretty high road. Focusing on developing it’s tools to adapt to new technologies – even when the rival companies that own those technologies don’t want Adobe around.

Potential borrowers with the payday loans to detect.